A TaTaCon's setup is similar to the arcade cabinet's setup, consists of:

Most iterations of the controller uses wired connection to connect it to the video console, computer or the first-party controller. The only exception to this is the Taiko Drum and Bachi set for iOS, which utilizes Bluetooth wireless connection.

Because the TaTaCons were made to be compatible with the video game console they were designed for, cross-platform compatibility with incompatible console is very limited.

It should be noted that some non-Taiko no Tatsujin games, particularly Kamen Rider Hibiki on PlayStation 2, are compatible with the TaTaCon.

For PC users, connecting the earlier TaTaCons can be troublesome as the TaTaCons uses proprietary connectors, meaning that they requires the compatible proprietary-connector-to-USB adapter to make it work. Later iterations of TaTaCons doesn't have this problem as they use USB connector or Bluetooth connections. It was confirmed that both the PS4 and Switch TaTaCons were shows up as HID-compliant DirectInput devices while connected to a Windows PC.

In addition to being sold separately, there's game bundles that includes the TaTaCons as well. The following game and TaTaCon bundles are as follows: 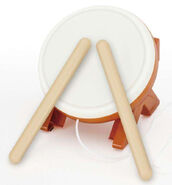 Taiko and Bachi set for Wii and Wii U.

Special gold plated variant of Taiko and Bachi set for Wii and Wii U. 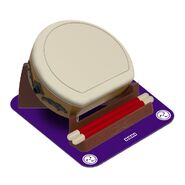 TaTaCon Pro for Wii and Wii U. 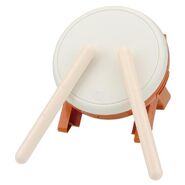 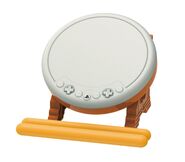 Taiko and Bachi Set for PlayStation 4.
Add a photo to this gallery

Retrieved from "https://taiko.fandom.com/wiki/TaTaCon?oldid=8122"
Community content is available under CC-BY-SA unless otherwise noted.