Due to her human disguise, the Great Tanuki (Ponko's father), while is wearing the Demon King disguise, doesn't know that the human girl who wears the leaf hair ornaments is in fact Ponko. This led him to some misunderstanding (where he think that Don had done something bad to his daughter) and almost try to destroy earth.

She is always wearing a pink scarf, and is also seen wearing a leaf on her hair. (except when she was untransformed)

Prior to the beginning of Dororon! Yokai Great Decisive Battle!, her father, the Great Tanuki, was missing and she have to staying in the Iga village under the cares of Master. She tries to go to find her father but Master won't let her do that because the yokais are recently targeted her.

That was until they met Don, who happened to accidentally time-slipped into the past from the future by a portal. As Don agreed to banishes the yokais, Ponko ask Master if she can come with Don in order to search for her father. Master, after a thought, agreed and both Don and Ponko set out for the adventure.

During the later story arcs, she learn from Yukie and Miyuki that they saw the Great Tanuki was being eaten by the Demon King and killed him. This made Ponko very angry and blames the Demon King for that, and this leads to the final showdown between her (and Don) and the Demon King.

Ponko say farewell to Don and Katsu as they returns to the present time.

Ponko later returns in a DLC side-quest in Taiko no Tatsujin: Don and Katsu's Space-time Adventure. 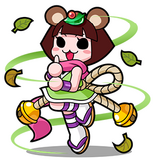