Mecha-Don usually replaces Don Wada in auto-play mode in the console entries of the franchise.

Mecha-Don is a robotic anthropomorphic taiko drum. His face and body is red and blue, respectively. His face has big yellow robot eyes, and his arms and legs are shaped like ear buds.

Mecha-Don is the rival to Don and Katsu.

Despite being a robot, Mecha-Don has a very low IQ and in one instance, he shut himself down after his AI got overloaded with just the simple math questions. Over time, he gradually grew smarter. He usually ends his sentences with "mecha" and all of his sentences are only written in katakana, with the exception of when he's used in auto-play.

In the anime, Mecha-Don is seen as a smart robot being able to create an army of clones of himself, each with different abilities, and even fuse together to become Mega-Don. However, it backfires on him on numerous occasions.

Mecha-Don was originally an old, abandoned taiko drum that the staff of the Municipal Wadaiko Laboratory found on the street. Said drum was modified into the robot, and thus Mecha-Don was born.

It was also revealed in Portable 2 that Mecha-Don was not the first robotic drum the laboratory had even created; There were numerous robotic drums created before him.

The army of Mecha-Dons in Clay Anime. 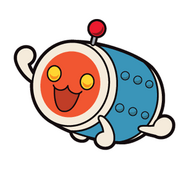 Mechadon merges with his clones to become... Megadon!
Community content is available under CC-BY-SA unless otherwise noted.
Advertisement