Hatsune Miku (Japanese: 初音ミク, Hatsune Miku) is a character who is a moe anthropomorph of the Vocaloid software voice bank of the same name created by Crypton Future Media.

In the game Edit

In most games, she is one of the guest dancers when selecting some of the Vocaloid songs. She appears alongside with her fellow Vocaloids.

She is one of the guest session characters donder can play with. In the base game, the songs in which she is eligible of are "Ghost Rules" and "Alien Alien". The Hatsune Miku DLC pack also added more eligible songs, they are: "Senbonzakura", "Miku Miku ni Shite Ageru♪【Shite Yan Yo】" and "Hatsune Miku no Shoushitsu -Gekijouban-". A petit chara accessory based on Miku also appear as an obtainable accessory.

While not in the base game, Miku was added as one of the selectable performance characters through the Vocaloid Song Pack Vo.1 DLC pack. Miku's ability is Increased spirit gauge gain Lv.2. 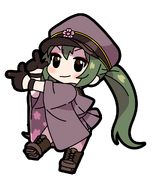 Miku in her Senbonzakura outfit, first seen in Drum Session!.
Add a photo to this gallery

Retrieved from "https://taiko.fandom.com/wiki/Hatsune_Miku?oldid=8401"
Community content is available under CC-BY-SA unless otherwise noted.