Don Wada (Japanese: 和田どん, Wada Don), usually refers to as Don-chan (Japanese: どんちゃん, Donchan) or simply Don, is the main character of the Taiko no Tatsujin series. He is the protagonist and the playable character. His brother is Katsu.

Don is an anthropomorphic taiko drum. His face and body is red orange and blue respectively. His face is beady eyed and often sports a cat face-like mouth while his arms and legs are shaped like ear buds.

In the Clay Anime, Don's appearance is slightly different in the game itself; His body is a little chubby and is baby blue, and his face is slightly more red (Although The Great Soul says it is orange).

Don, in his most appearances in the franchise, is usually shown to be carefree and easygoing. He has a child-like voice, and he is often very cheerful.

He has a monstrous appetite, and has expensive shopping at the Wada House which may take over for the worst. He is unable to think of very complicating things.

His specialty is handicraft, and he's known for crafting items related to summer festival. His favorite foods are takoyaki and sushi. He is unaware that Donko has a crush on him.

Don, along with his twin Katsu, were born on March 3, 2000, when a pair of tamashii were fused into the taiko drums.

Still the infants, Don and Katsu were being taken care of by Master Bachio and learning taiko drum skill. He and Katsu, who grew up and wanted to realize their dream to share the beauty of the taiko drums to the world, settled on staying in Wada household.

When Kodama arrived into the Wada house, she revealed that Don's tamashii is in fact the one she accidentally slipped into the human world. Don's tamashii was ultimately taken away by the tennyo and the body became a static normal taiko drum. That was until a year later, Don's tamashii was sent back into the taiko drum and Don was revived. Happy that he came back to the world, he breaks down in tears of joy.[1] 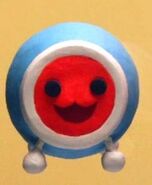 Don, as he appear in Clay Anime.

Don Chan as he appears in Family Tennis for the GBA